Contributing to History: Lyn Swanson’s Role in the 2017 Nobel Prize in Chemistry

One of the amazing things about science is the way research and developments can ripple on for years and even decades, “building on the shoulders of giants” and impacting change in ways we never even imagined. At the Murdock Trust, we’ve seen an incredible example of this impact first hand in just the last few weeks.

In October, we learned that Jacques Dubochet, Joachim Frank, and Richard Henderson would be honored with the 2017 Nobel Prize in Chemistry for their work with cryogenic-electron microscopy (cryo-EM). The research makes it possible to view biomolecules like never before. 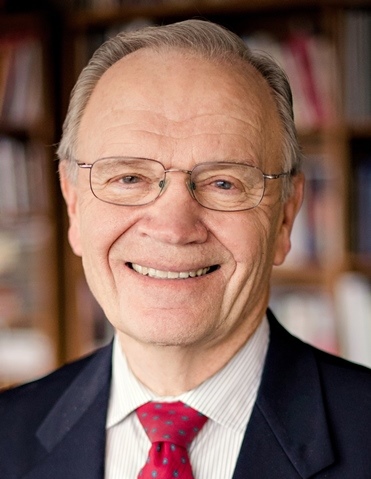 As fascinating as this work is, it likely would not be complete today were it not for the Trust’s own Dr. Lynwood Swanson. As we’ve previously shared, Dr. Swanson’s career included extensive time in the classroom and laboratory as an educator-researcher, but also in the private sector where he launched the company FEI.

Over the years, FEI has invested heavily in developing and refining the Cryo-EM technology. In particular, FEI created the cryo-transmission electron microscope (cryo-TEM), which was used by this year’s prize-winning trio to detail the structures and shapes of certain biologically important proteins that heretofore have been unsolvable. It’s incredible to think that work that started decades ago in an Oregon lab has led to this internationally renowned development.

This type of scientific advancement is invigorating for the entire team at the Murdock Trust. Our excitement is only heightened by the fact that one of our own beloved trustees and leaders was able to contribute to this success.

Moreover, the Trust has recently made a grant to support a major research university in the Pacific Northwest in procuring the latest and most powerful a cryo-EM.

Congratulations to Drs. Dubochet, Frank and Henderson, as well as to Dr. Swanson and the entire team at FEI.