Partners in Science: Inspiring Award-Winning Work Across the Northwest 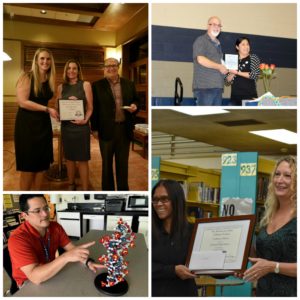 The Partners in Science program blends two of Jack Murdock’s deepest passions—scientific research and inspired education. Through this program we pair high school science educators from across the Pacific Northwest with a research mentor in an academic lab or in a lab associated with a nonprofit research institution. For two summers, the two work together on a defined research project with results shared at our annual national conference. Our goal is to give teachers the opportunity to “do science” and then help them bring knowledge from the research lab directly into the classroom to promote hands-on, inquiry-based science education.

This past weekend, we had the opportunity to see some of this research from our teachers and other teacher-researchers from across the country up close at our 2018 national conference in San Diego, California. But we’ve also had the opportunity to see the real-world impact of these partnerships throughout the year as several participants have been recognized for their work bringing science education to life for students every day. Here are just a few of the outstanding educators who have been recognized for their work.

David Valenzuela, co-chair of the science department at Madison High School in Portland, Oregon, was honored with the OnPoint Prize for Excellence in Education as the 2017 Oregon Educator of the Year. David has shared that he is fueled by science’s ability to solve major problems facing the world today and his desire to instill this enthusiasm in his students.

Cleveland High School’s Brenda Gordon was spotlighted as the 2017 Oregon Outstanding Biology Teacher of the Year by the National Association of Biology Teachers. Brenda has been inspiring students for more than two decades and has worked on several notable scientific projects, including the Haystack Awareness Program, the Friends of Oak Bottom Restoration Project and the Oregon National Primate Center.

Across the border, Tim Renz received applause in 2017 as Washington State’s 2017 High School Science Teacher of the Year. Tim began as a teacher participant in Partners in Science and has moved on to serve as an implementation coach assisting others. Tim credits the Partners in Science program with helping him expand his network and bring unique learning opportunities to his students.

And in Montana, Kim Popham (a Veteran of our program and current implementation coach) and Craig Beals (also a Veteran) were recently named as Finalists for the President’s Award for Excellence in Math and Science. The winners of this award will be announced later this year.

Our heartfelt congratulations to these educators and to all of the teachers and researchers who help bring stellar scientific education to our classrooms through the Partners in Science program.

Webinar: Arthur Brooks and The Most Important Thing in Life