The Fierce Urgency of Both/And: The Legacy and Wisdom of Dr. Martin Luther King Jr. 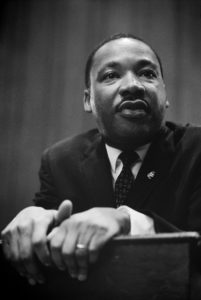 The day after the 50th anniversary of Martin Luther King’s assassination, I was thinking about his contested legacy, the push and pull between those who want him remembered one way and those who want him remembered the opposite way. I called up my email and there it was, as if on cue, a near-perfect case study in the “either/or” thinking that plagues our conversations about Dr. King—and, frankly, so much else.

First,  a commentary by Cornel West on King the radical, King the revolutionary, King the political prophet who indicted “U.S. empire, capitalism, and racism” and was widely reviled for it.

Next, an article on Dr. King’s legacy from the Christian Broadcasting Network. If you hadn’t known better, you would have thought it was about a different man who had the same name as the subject of West’s piece. “Remembering MLK’s Legacy of Love,” the headline read. The article went on to say that MLK was about forgiveness, redemption, and transformations of the heart.

So which MLK was the real MLK? The MLK of radical politics and social reform or the MLK of inner spiritual transformation?

Can someone give me a “both”?

Headline-skimmers would probably place my own King-legacy piece in the Cornel West category. In a column for Religion News Service appearing a few days before the anniversary, I argued that we ought not “domesticate” Dr. King by remembering him in warm, fuzzy ways while forgetting that he had sharp political edges.

I hope readers made it to the latter part of the piece, where I pointed out that King was also a Christian minister. Love and transformations of the heart, I believe, are essential parts of his legacy. Confronting my fellow seculars and liberals—I sense that many conceive of Dr. King in their own image—I wrote, “He challenged and confounded liberals and Democrats in his lifetime. You can bet he would do the same today.”

Sadly, what we do to Martin Luther King, Jr., we do to most other people and issues. Since time immemorial, it seems, we human beings have been succumbing to the temptation to keep our categories clear and our lines of division bright and straight.

You’re in or you’re out. You’re for us or you’re against us. You’re one of us or one of them.

Reality does not map onto this dualistic thinking. People invariably don’t fit the boxes we want to squeeze them into. The smartest solutions to social problems often involve ideas and tactics that draw from both “conservative” and “liberal” philosophies, and from sources of thought and energy that are neither.

When it comes to application of the Christian Gospel, dualistic thinking often stunts our imaginations. The Gospel compels believers to create a more just society, some claim. No, the other “camp” counters. It’s an individual faith. It’s souls, not society, that we must transform.

My vote goes to Christians like Ron Sider, former president of Evangelicals for Social Action. Ask people like Sider whether Christian faith is about personal transformation or social justice, and they’ll tell you “yes.” As Sider once put it to me, if we are going to make communities better, we need to improve social conditions and transform the hearts of those who inhabit that society.

Call it the fierce urgency of “both.”

If we’re going to get anywhere in addressing our century’s pressing challenges—challenges that defy liberal-vs.-conservative, religious-vs.-secular—we are going to have to be imaginative and resourceful, open to good ideas from wherever they might come. To quote Josh Yates, director of the Thriving Cities Project at the University of Virginia, we are going to have to form “unusual coalitions … bridging social sectors, classes, racial and ethnic divisions, and even metaphysical commitments.”

The lessons and legacy of Martin Luther King don’t fit our either/or boxes. Nor do those of the Jesus he followed. We cannot confine ourselves to our self-imposed limits if we are going to carry on Dr. King’s unfinished work, in our society and our hearts.

Tom Krattenmaker is an author and columnist specializing in religion in public life and communications director at Yale Divinity School. His latest book is Confessions of a Secular Jesus Follower (Convergent 2016).

Reflections on an Historic Day